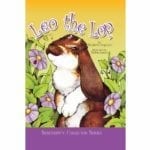 Leo the Lop was a real rabbit and was not only the inspiration for the book by the same name, actually nearly wrote the book himself.

When Robin James and I first began working together, I would, with much trepidation, agree to meet her at her parent’s home, where she lived.  The trepidation was caused by the largest rabbit I had ever had the fear of knowing, Leo.  Leo was, of course, a lop, a flop-earred rabbit whose ears hung down, not up like the other traditional bunnies that were also in residence.

Leo’s other attribute was that he weighed nearly 45 pounds and (a big AND) had a bit of an attitude when it came to the kindly folks that would come to visit — he would often spontaneously bite those that got in his way.  So, it was that whenever I came to meet with Robin I would sit statue-still hoping he would ignore me and hop on to attack others — never the luck.  No matter where I sat cowering, he would seek me out.  For, you see, Leo liked me, liked me a lot.  He would hop down the hall, into the living room and without hesitation thunderously thump over to me.  There he would sit up, his head towering above my knees and stare intently at me, deciding if I was friend, foe or food.  Then, without fail, he would rest his massive head on my knees and I would gently scratch between his ears, sometimes, it seemed, for hours.  I scratched without complaint, for many times I had seen him bite those ‘others’ that were not as subservient as myself.

With little to do but scratch, I had plenty of time for wondering. “Why did he act like this? Why was he so mean?”  It finally dawned on me that though he was big and often thought the bully, he was probably more often bullied and teased by the other bunnies because his ears went down instead of up.

And so the story was written.