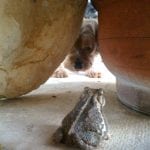 Jolie Bear and the magical mysterious creature behind the rock!

Six years ago it was my custom to let our little Yorkie, Jolie Bear, out just before bed to do those things that are best done outside.  Normally I would flip on the floodlights to illuminate the big Mesquite Tree and the river stone patio beneath its massive limbs. Then and only then I would open the back door and out she would bound (all 11 pounds of her), barking like a hound from hell and delighted that all the deer, camped out in the back, would run fearfully into the woods.  She would only charge as far as the patio, knowing full well that just beyond the patio was a field strewn with painful sticker berries.

This particular evening I varied my routine and opened the door first as I reached around and flipped on the lights.  While I was distracted she leaped to the chase BUT in the two seconds that it took me to flip on the lights, she was gone!

My heart pounding wildly, I rushed around the yard calling out to her, but she was nowhere to be found.  The harsh reality of what had happened chilled me to the bone.  Coyotes!  Our area was plagued with coyotes and obviously one had been waiting in the deep shadows for just such an event.

Celia and I spent the next three to five hours tramping the woods and calling out in vain, but she was gone, most likely carried off by a marauding pack of coyotes.  Echoing in the distance we could hear the blood cries of the pack followed by dogs of all sorts barking in return.

For days we held on to faint hope that she might return, but on the fourth day we reached the inevitable conclusion.  She was gone forever!  Sadly we put away her toys and her food dishes.  That night Austin was hammered by a vicious Texas storm. At 2:15 I woke thinking I had heard an animal on the front porch.  Opening the door I thought I saw a small dog, wet and disheveled huddled beneath a chair. But in the bright light of a lightning bolt I could see there was nothing there, save for wishful thinking.  Now, I have always held the belief that animals too have an afterlife and have written an entire series, the Ark Angels, in dedication to many of the pets I have had in my life.  Just in case Jolie Bear’s spirit was there, I spoke to her trying to soothe her fears.

Still mourning her loss, we moved slowly through the next few days.

And then, on the following Saturday morning Celia got a call from a woman who said she had our dog. She told her she must be mistaken — our dog had been killed by coyotes.  The woman insisted saying that the dog they had found was ‘chipped’ and Celia’s phone number was assigned to that chip.

We raced to a rendezvous, and there to our great surprise and delight was Jolie.  Her head had two deep canine indentations and an open wound on her lower neck, where the coyote had gripped her in its jaws. We can only guess what had happened: She had indeed been carried off by a coyote that had assumed (as coyotes are wont to do) that Jolie was dead not simply passed out.  At some point the coyote had been scared off and dropped her, planning to come back later for a meal.  To insure ownership, the coyote had marked her (urine is always a sure fire marker).  Revived some time later, Jolie staggered off and wandered for a day or two until seeking shelter from the massive thunder storm on a kindly human who had found her huddled under some lawn furniture on her porch.

AND yes it was the same night and time, 2:15 when I thought I had seen Jolie on our porch. These kind and caring people tended to her wounds, bathed her, allowed her to sleep on their bed and in the morning took her to the vet where the chip was found.

Still and all it was and is a miracle that we were graced with her presence for another six years. Best wishes Jolie Bear, may you always fly on the velvet winds of Heaven’s Light.  We will love you forever. RIP

Set Two of the Serendipity Book Collection (8 titles: Bangalee, Dream Tree, Ming Ling, Sassafras, Kartusch, Squeakers, Trafalgar True, and Zippity Zoom) are now available BUT website bookstore is a bit screwed up. Should you want the new set please pop me an e-mail. (I have limited copies available) 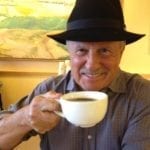 It had been my intention to get a mug of Hot Hoog, but there was none to be found. Instead a big ol’ cup of coffee will have to suffice. I am back to the studio tonight to layout the writing path for the morning. Without a structured path, I have a tendency to wander a bit.

That’s what my brain feels like after these past several months. Re-launching my entire library sounds like a great idea BUT (and this is a big but) it was and is more work than I could have imagined. All that in conjunction with the ecological fantasy, SOS, the song of the sea, and I am one very pooped puppy.